A group of care homes in the New Forest have just received their third consecutive ‘Outstanding’ within a year from the Quality Care Commission (CQC). 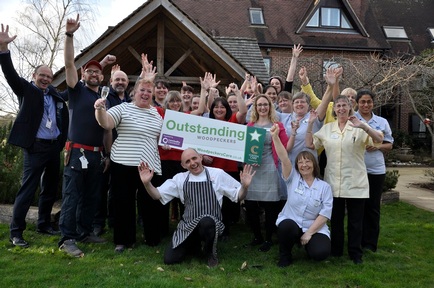 The rating was awarded to the Woodpeckers care home in Brockenhurst, which is part of the Colten Care group. Inspectors praised the home for its ‘one-team’, approach, adding: “Staff understand the needs of people and support them in an exceptionally personalised way.”

Woodpeckers is a 39-bed care home with nursing for older people.The other homes that also received an outstanding accreditation, were Linden House in Lymington and Kingfishers in New Milton.

Dedication to high nursing standards and working with local health organisations was singled out in the CQC report. It said: “The service worked in partnership with other health organisations and were involved in a pilot with the local clinical commissioning group called ‘NEWS’ National Early Warning Score in care and nursing homes to identify a physical deterioration in people and to detect early warning signs.

“All senior nurses had attended a study day on how to use the tool in line with best practice. This meant nurses observation skills and responses times were improved resulting in decisions for emergency services being appropriate and working closely with the NHS to reduce inappropriate referrals.”

Mark Aitchison, Colten Care chief executive, responded to these comments, stating: “It’s particularly gratifying as we are achieving this independent recognition while investing in nursing at a time when others are turning away from it due to recruitment challenges and higher costs.”

In total, 15 per cent of Colton Care’s homes are rated outstanding against an industry average of less than two per cent and, three out of their five New Forest homes have now been rated as outstanding.

“With all 20 of our homes rated outstanding or good, we can justifiably lay claim to being in a different class from many other private sector operators.”

He praised staff for their hard work, and when receiving the outstanding certificate, said: “You should all be especially proud that Woodpeckers is the first Colten home to be rated outstanding across three separate lines of enquiry: being effective, responsive and well-led.

“That’s a huge triumph involving a great many people.”