An 85-year-old dementia resident with limited speech has been ‘brought alive’ by a lifelike children’s ‘robotic pony’, brought into the care home by the registered manager for a racing-themed open day. 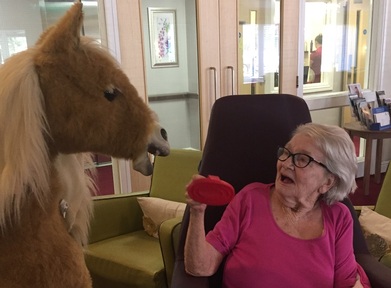 The animatronic pony was purchased for a two-figure sum on eBay by the home manager of Hastings Court in Hastings. Georgina Gamble had bought the pony from an online auction site as she thought it would be a nice toy for her young grandchildren to play with. However, resident, Mary Long, who has advanced dementia, amazed staff and family by suddenly chattering away to the robot toy, often for ‘hours on end.’

‘The pony doesn’t demand anything of her’

Therapy pets have long been used in care home settings, and increasingly, care environments are seeing ‘robotic therapy pets’ manufactured especially for their market. These ‘therapy pets’ are specially designed for people who are unable to take care of real animals.

Recent studies have shown that they are particularly effective when treating residents with dementia, and those with speech problems.

Ms Gamble said: “When people like Mary lose the ability to verbally communicate they can find it more difficult to connect with others and as a result, they can feel more isolated.

“The pony doesn’t demand anything of her, but it responds to her touch by whinnying and she’s made a connection that she gets a huge amount of pleasure out of. And the effects of the interaction last – her mood is brighter for a while after spending time with the pony.”

Ms Long, a former dental nurse with dementia, lives at Oakland Care’s Hastings Court care home which offers residential, nursing, memory and respite care. Her daughter Sharon works there as a receptionist, and her husband and five other children call in regularly to visit. 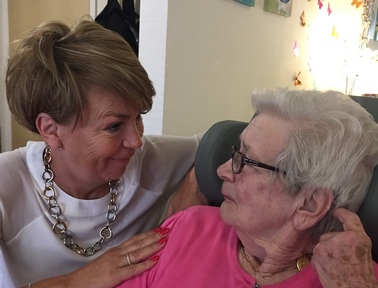 Sharon can’t believe the difference the robot pony has made to her mother’s mood. She said: “Although Mum can’t say much to me these days I know she’s happy here. To see her come alive when she spends time with the pony just makes my day.”

‘Mum can literally spend hours chatting to the pony’

The realistic looking animatronic horse, which makes a whinnying sound and moves its head and legs, is not quite as big as a real pony but stands a good few feet off of the floor, being originally designed for young children to be able to sit on.

Although the robotic pony at the care home was initially designed for a child, previous studies have shown that robotic pets have similar benefits to real animals; they can increase feelings of wellbeing to counteract those of loneliness, as well as help to lower blood pressure.

Ms long has memory loss and mobility problems which are a direct result of Fragile X-associated tremor/ataxia syndrome (FXTAS). At the home, she likes to sit in reception with her daughter whilst she is working.

Sharon says her mum’s reaction to the pony was immediate. She said: “I went and brought my mum downstairs as I knew she loved animals and she literally sat talking to the pony for three hours and was trying to feed it and brush it.”

She believes the robotic ‘pet’ has really improved her mother’s quality of life. She says: “Mum can literally spend hours chatting to the pony, saying “come to Nanna” and feeding it carrots. She has always loved animals and as children we always had dogs and cats at home. To see her interacting with the pony, brushing it and laughing, is very, very special.”

Staff at Hastings Court found the pony robot had a similar effect on many of the other residents in the 80-bed home too. They also enjoy visits from a live pony and other therapy animals including sheep, dogs, ducks and rabbits. 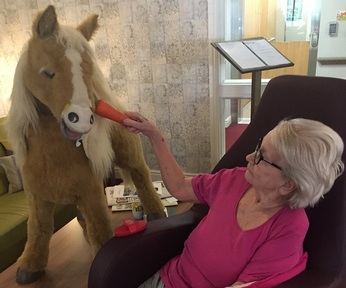 In December of last year, children’s toy manufacturer, Hasbro, launched a realistic robotic puppy aimed at ageing adults. This was in addition to their successful ‘pet cat’, aimed at the same market. The cat ‘purrs’ and moves when stroked and has tactile fur. Some older people think it’s a real animal, and others are aware that it’s purely robotic.

This ‘companion pet’ range, called Joy for All, is now made by a company called Ageless Innovation which is made up of former Hasbro employees; they set up shop in May 2018. Their CEO Ted Fischer said in an interview on YouTube channel, The Not Old Better Show”, that they had noticed a similar Hasbro toy was being bought for ‘unintended users’ a decade or so ago.

The CEO explained: “There was a product that was intended for 4-8-year-old girls and about 10 to 15 per cent of the reviews we got were from people not buying it for their daughters but buying it for an aging loved one.”

Interestingly, Hasbro were also the makers of the animatronic FurReal Butterscotch Pony which Ms Long took such a liking to at Hastings Court. When Ms Gamble realised the pony was such a hit with her care home residents, she immediately bought an identical one off the internet. This now lives permanently at the care home, and her happy grandchildren get to keep the original.